Hope is the thing with feathers, Emily Dickinson wrote a long time ago.  Where does it fly nowadays, does it keep its eyes on Afghanistan? Last night I read poems by Meena Keshwar Kamal (commonly known as Meena). I wanted to type something about Meena right away, but then decided it would be better to do it in the morning, to let her poems stay with me for a while, in the stillness of the night.

Meena was an Afghan revolutionary political activist, feminist and founder of Revolutionary Association of the Women of Afghanistan (RAWA). She was only 20 when, in 1977, she launched RAWA, Afghanistan’s first organized movement for women’s rights. Four years later, Meena launched a bilingual feminist magazine called Payam-e-Zan (Women’s Message). 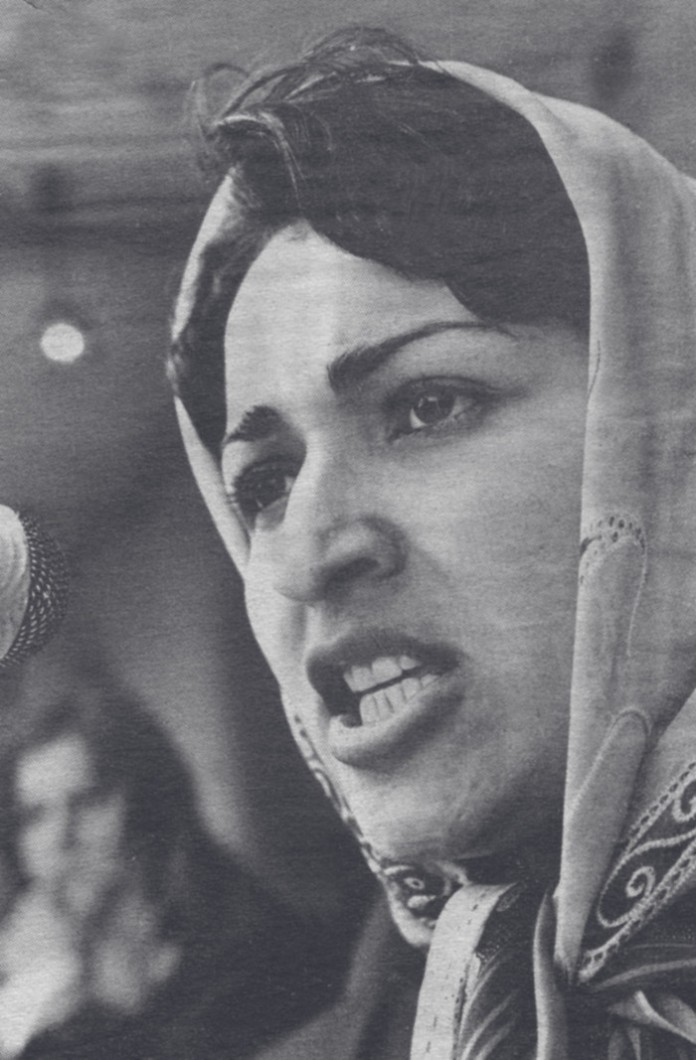 In the beginnings with RAWA, Meena started a campaign against the Russian forces and their puppet regime in 1979 and organized numerous processions and meetings in schools, colleges and Kabul University to mobilize public opinion. Payam-e-Zan has constantly exposed the criminal nature of fundamentalist groups. Meena also established Watan Schools for refugee children, a hospital and handicraft centers for refugee women in Pakistan to support Afghan women financially.

Sadly, when she was only 31, Meena was assassinated by agents of KHAD (Afghanistan branch of KGB) in Pakistan in 1987. She was married to Afghanistan Liberation Organization leader Faiz Ahmad, who himself was assassinated a year earlier, by the agents of Gulbuddin Hekmatyar in 1986. They have three children, whose whereabouts are unknown. 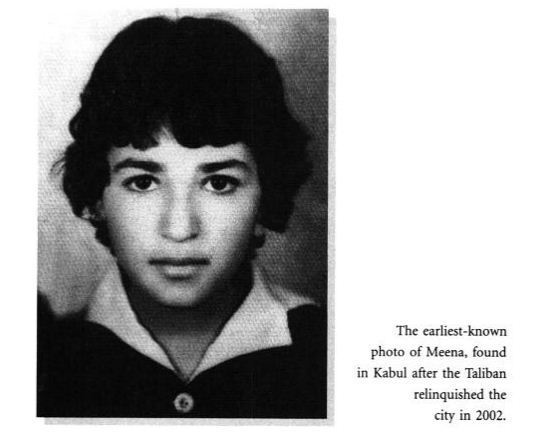 In a biography about Meena, published on the RAWA website following her death, the organization said:

“Meena gave 12 years of her short but brilliant life to struggle for her homeland and her people. She had a strong belief that despite the darkness of illiteracy, ignorance of fundamentalism, and corruption and decadence of sell outs imposed on our women under the name of freedom and equality, finally that half of population will be awaken and cross the path towards freedom, democracy and women’s rights. The enemy was rightly shivering with fear by the love and respect that Meena was creating within the hearts of our people. They knew that within the fire of her fights all the enemies of freedom, democracy and women would be turned to ashes.” 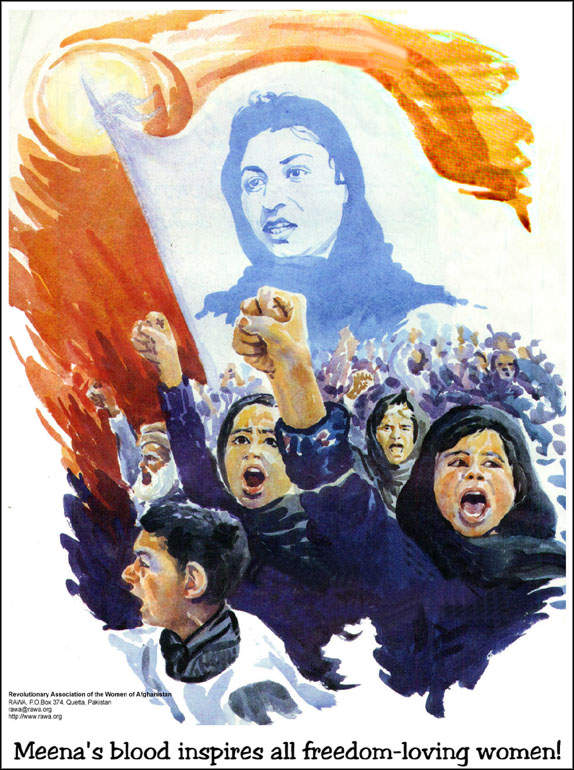 I’ve arisen from the rivulets of my brother’s blood

My nation’s wrath has empowered me

My ruined and burnt villages fill me with hatred against the enemy,

I’m the woman who has awoken,

Oh compatriot, I’m not what I was 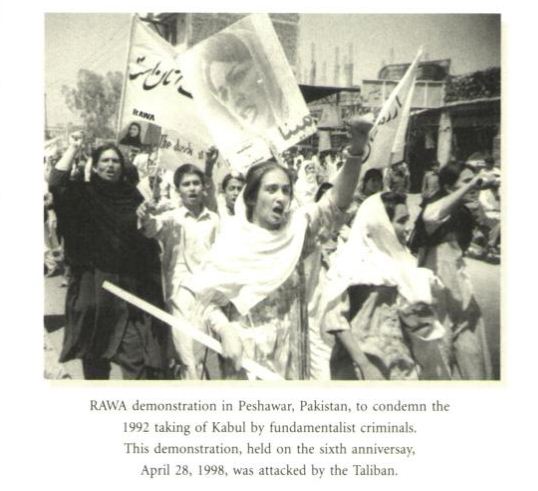 I’ve been reborn amidst epics of resistance and courage

I’ve learned the song of freedom in the last breaths, in the waves of blood and in victory

Oh compatriot, Oh brother, no longer regard me as weak and incapable

With all my strength I’m with you on the path of my land’s liberation.

My voice has mingled with thousands of arisen women

My fists are clenched with the fists of thousands compatriots

Along with you I’ve stepped up to the path of my nation,

To break all these sufferings all these fetters of slavery,

Oh compatriot, Oh brother, I’m not what I was

Meena represented the struggle Middle East needs the most – the liberation from within. Not some Western forces coming to “liberate” or to “establish a democracy”, but a true change that can never be achieved by imposing it from the outside. She spoke about the history of Afghan women’s struggle for social recognition and equal rights in connection to the history of the country’s physical and cultural devastation (by different invasions and wars). She connected the two, which is what Western mainstream media so often fails to do.

Her organization, RAWA, continued with work after Meena was assassinated, and is still very active today:

“RAWA believes that freedom and democracy can’t be donated; it is the duty of the people of a country to fight and achieve these values. Under the US-supported government, the sworn enemies of human rights, democracy and secularism have gripped their claws over our country and attempt to restore their religious fascism on our people.” 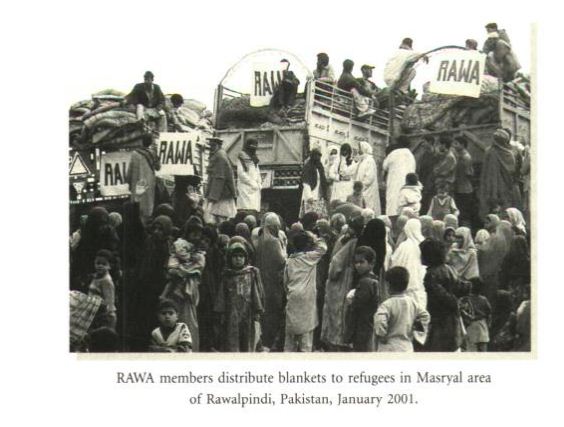 Women from RAWA are doing great things and helping many people. In that sense, all those images we see of helpless and abused Afghan women in the Western media, obuscure the great role Afghan women play as agents of change in Afghanistan, and have been playing for the last couple of decades. It’s not just RAWA and Meena. One of the things that first comes to my mind is the story of the village widowed women built on a hill overlooking Kabul. Or the story of women’s bakery in a small village in rural Afghanistan. Or the story of Shamsia Hassani, Afghanistan’s first female street artist. Or the story of Setara, singer who appeared on the Afghan Star, sang with great emotion, and included dance in her final performance, an action that put her life in danger. Or the story of Sadaf Rahimi, first female boxer in Afghan national team, who was invited to London Olympics in 2012 (at the age of 17).

There’s many stories like this, and there will be many more, because the women of Afghanistan are not just oppressed, abused and broken, but powerful, brave and active. Like Meena was. Hope, that thing with feathers Dickinson wrote about, still keeps so many warm, and never stops – at all.