Adina Hoffman’s My Happiness Bears No Relation To Hapiness: A Poet’s Life in the Palestinian Century is the best book I read this year, and it just might be one of my favourite books ever. I read it half a year ago, when it finally found its way through the jungle of air mail, and I am finally writing this review.

I mentioned the book in some of my previous writings, in connection to other stories, but never dedicated a full post to it. I needed time, I guess. The book tore me apart. Hoffman tells the story of Taha Muhammad Ali, great Palestinian poet, writing about his life, poetry, and the culture he emerged from.

I already loved Taha’s poetry so my expectations before reading this book were high. All of the doubts I might have had disappeared after reading the prelude pages. I think there was no better person to write Taha’s biography than Adina Hoffman. Her writing is so delicate, so rich in detail and encompassing at the same time, and simply – captivating. Taking in consideration the trust and the relationship Taha and Adina had developed over time (before this book was to be made), this was just a perfect combination.

“Taha is a hardly well-known personality in the West; he is, in his own proud terminology, ‘a peasant, a son of a peasant!’, and is, moreover, a latecomer to poetry: his first book was published when he was fifty two years old. He’s a writer with a relatively small oeuvre (five collections of poems and a book of short stories) and a mostly underground reputation in the Arab literary world – where, it should be said, poetry has always been a highly public medium.(…) Taha Muhammad Ali is, meanwhile, nobody’s national poet. An autodidact, he has operated a souvenir shop near Nazareth’s Church of the Annunciation for more than fifty years. Although his store has for much of that time served as a modest magnet for poets, intellectuals, teachers, and ordinary people of all Arabic-speaking stripes and camps, his perspective on modern Palestinian history and literature has remained unusually private.(…)

It also seemed to me then – and has only proven truer the more time I have spent with Taha – that his story is at once entirely singular (even eccentric) and completely representative of the sagas through which his people have lived. Born in 1931, Taha has witnessed enough history to fill several lifetimes, and I wanted, as I set out, not just to account for what he had seen but how he had seen it: to try, in other words, to convey  the ways such cataclysmic historical events look through they eyes of one exceptional man. As most everything in the Middle East inevitably is, the effort may be viewed as political – but it was insipired, first and foremost, by the far less absolute realm of art.”

Hoffman also writes about her perspective when taking on this project, her views as a Jewish woman, as an Israeli citizen, her experience of life in Jerusalem and differences in relation to Palestinian lives. She writes: “An American-born Jew who has lived in Jerusalem for much of her adult life – assuming a sort of bifocal nationality in the process – I carry two passports, American and Israeli, and am someone who arrived in the Middle East knowing not a word of Arabic and bearing no particular affinity for Palestinian culture.”  Around two decades later, she took on a hard role – to write a biography of a poet Taha Ali, to submerse herself in Arab culture, but also – inevitably – to tell a political story, a story of a Palestinian life in twentieth century.

That fact itself is a big sign of hope for the Israeli-Palestinian story. Because, more than politics, poetry, historical insights (all very important and present in this book), above all of that, Hoffman’s approach to Taha’s story is emphatic, human.

She describes Taha’s influences when growing up, writing about his father’s madafeh:

“Abu Taha, meanwhile, spent almost all his waking hours in the third room in the house, his madafeh. In Saffuriyya, as in other Palestinian villages of the time, a madafeh – literally, a place for dyuf, guests, could mean any number of things… But to call it a ‘humble’ room , or to detail its minimal contents – a few straw mats, several thin wool-stuffed mattresses, a low stool, the worn shoes of the men cast of by the door – is to do injustice to the vast place this small square of plaster and stone occupied in the imagination of the young boy. It was – as his basically immobile father was, the sturdy pivot around which all his own wanderings through the village and orchards unfolded. It was the place where he first heard poetry and pre-Islamic legends, first encountered local history and world politics, first absorbed how men talked to one another, first learned how to listen. It was ‘the university of fallah’, as his brother Amin describes it, more than half a century later. The guests in the madafeh, he says, would constantly tell stories and talk and argue and laugh: the conversation never stopped. ‘They had knowledge of life, they had experience. And they had confidence in themselves.’”

“Following the dirth path that ran beside the bayader, he walked for about five minutes, and it was then that he heard an odd, low, whirring sound, something circling in the air above. As it lifted to a whistle, then mounted to a roar, he saw a brilliant flash, felt a crash and tremor, and another – then everything was smashing glass and rising smoke, shouts in the distance, wailing nearby, people running, children crying, the sixteen goats yelping in terror as they scattered.”

It was an all-defining moment for hundreds of thousands of Palestinians.

“They walked for two days and much of two nights, and under the fig trees of Bint Jbely, the people at last came to rest. The harsh July sun had followed them across the border, and thousands of children and women and babies and man sat in exhausted groups, the ‘lucky’ ones finding space beneath  the only semblance of a roof in sight – the wide pointed leaves of the trees. Infants bawled, old women whimpered, mules brayed, truck brakes screeched, and those who found refuge in these foreign orchards and fields were surrounded on all sides by a constant, anguished din.

Noise or no, it was perhaps the first time in the course of those long hallucinatory hours since they’d left the village that Taha and his family and the people huddled with them had a chance to pause and try to reconstruct what had just happened. (…)

In a poem written forty years later, he describes a night when ‘we had/neither night nor light,’ when ‘no moon rose’:

We did not weep

When we were leaving

For we had neither

And there was no farewell.

We did not know

At the moment of parting

That it was a parting,

So where would our weeping 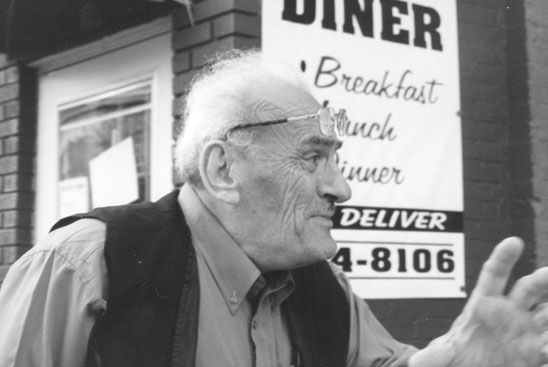 It was an exodus, a dual one. While the body had to go, the mind and the heart stayed. But, in the meantime, everything changed, and when the body and the mind returned – there was no familiarity with the space, no warmth, there were only flashes of what used to be, only ghosts of history. And home was lost once again.

“Although I know why Taha wants to go to Saffuriyya, I was not expecting a pilgrimage today. A few years earlier, in fact, when I’d ask Taha if he would take me to see what was left of the village, he’d begged off – insisting that every time he visited it he had a headache for three days. At that point, he had volunteered his brother Amin to accompany me instead – and had, in the end, written a poem called ‘The Place Itself, or I Hope You Can Digest It’, explaining his reluctance to return to the literal location of Saffuriyya, which is nothing but ‘dust and stones’, when emptied of the lives and life that gave it meaning: ‘For where are the red-tailed birds / and the almonds’ green? / where are the bleating lambs / and pomegranates of evening – / the smell of bread / and the grouse?'”

I am not keen on bombastic statements, but if you read one book this/next year – let it be this wonderful book.

Suad Amiry & The Absurdity of Life Under Occupation

Robert Fisk & The Age of The Warrior