Leila Abdul Razzaq is a young Palestinian-American artist. She’s a talented graphic artist and a great storyteller through images. Her graphic novel, Baddawi, is composed of stories of her father, about his life in a refugee camp in Lebanon where he grew up. Judy Suh made a lovely introduction of Leila and her work in the following video:

Razzaq says she didn’t draw Baddawi because it is a unique story. She did it because it is a common story that is not frequently told. For her, “Baddawi is not a tribute to my father, it is a tribute to displaced Palestinians worldwide. I write this because too often, I see Palestinian refugees (and for that matter, refugees in general) portrayed as objects of suffering to be pitied, defined by circumstance, rather than subjects of their own individual narratives to be empathized with.”

“As Palestinians, it is our responsibility to hang on to our heritage and our history, because it’s something that is being erased. We have to take control of our narrative because it is something that is being manipulated. We must maintain our identities as Palestinians in order to fight Zionism and the ethnic cleansing that it produces. For those of is in the shatat (diaspora), it’s not so much an ethnic cleansing that erases us from Palestine, but one in which Palestine is being erased from us.

At the end of the day, power is all about who controls the narratives and the discourse around a particular subject. I’m just another Palestinian trying to take back that narrative.”

Razzaq’s Baddawi images are scheduled for publication by Just World Books this spring. Baddawi also has its facebook page, where you can follow the final stages of writing/drawing the book. I am really looking forward to this one!

Bye Bye Babylon: Beirut 1975-1979 is a graphic novel dealing with the Lebanese Civil War, by accomplished Paris-based artist, illustrator, and designer Lamia Ziadé, who lived through the war as a child. The novel  doesn’t follow a traditional form with frames and captions, but rather, is a first-person narrative with a wealth of colorful illustrations in gouache.

In essence – it is a story of a rich family and the way they coped with the war, while the Lebanon’s poor and “others” world is far away. Ziadé doesn’t run from that fact. As a child in the book, she dreams of banana splits, American candy, flying on Pan Am Airways and visiting the local cinema. But there are moments her world clashes with the world of  “others”.

In one part of the book, when the family drives by the site of the destroyed camp after the massacre, Ziadé writes: “I feel heartbroken and ashamed, ignorant little rich girl that I am, to have envied the lives of those poor children.” Meanwhile, her nanny declares her support of the Kataeb, the Christian militia which destroyed the camp, and all that makes Ziadé very confused. She asks her parents, “‘Is it true that the Palestinians in Karantina were scum? And what are Palestinians anyway?” It is one of the great and truly honest moments.

Here are some more. 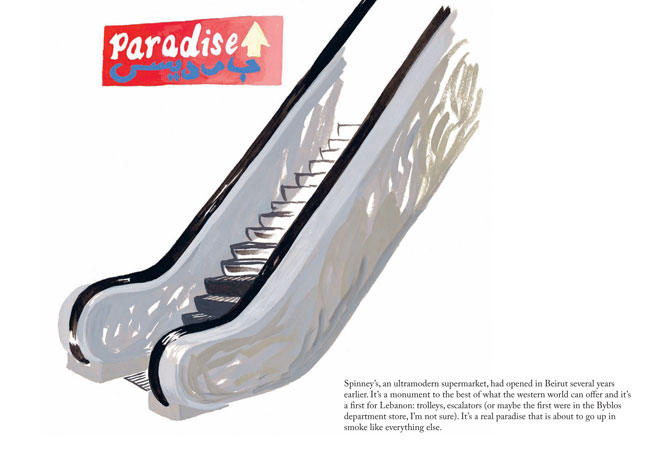 “Spinney’s, an ultra modern supermarket, had opened in Beirut several years earlier. It’s a monument to the best of what the western world can offer and it’s a first for Lebanon: trolleys, escalators (or maybe the first were in Byblos department store, I am not sure). It’s a real paradise that is about to go up in flames like everything else.” 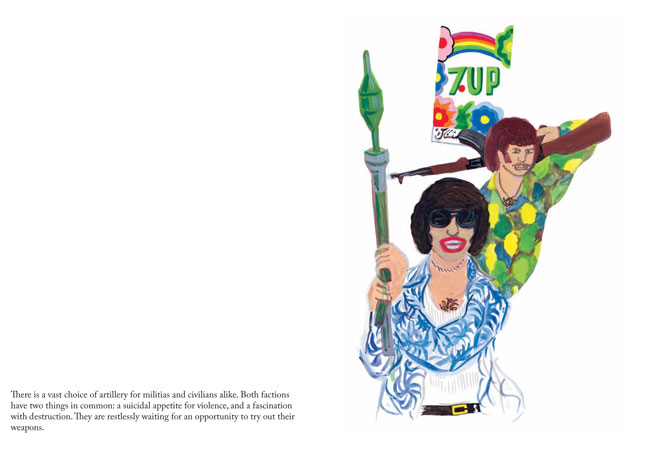 “But we still want to think that our country is the Switzerland, the Paris, the Las Vegas, the Monaco and the Acapulco of the Middle East all in one, and what’s more, we want to enjoy it. From the cafe terraces of Raouche or Ain Mreissels, where we sometimes go for a banana split, we can’t see the Shiite ghettoes or the Palestinian camps. And when we wear sunglasses we can’t spot all the dirt.” 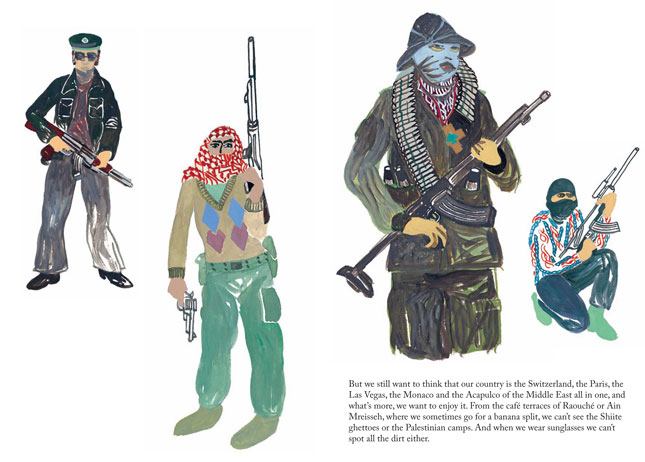 “The shiny Western varnish, which the Lebanese are so proud of, is finally cracking…” 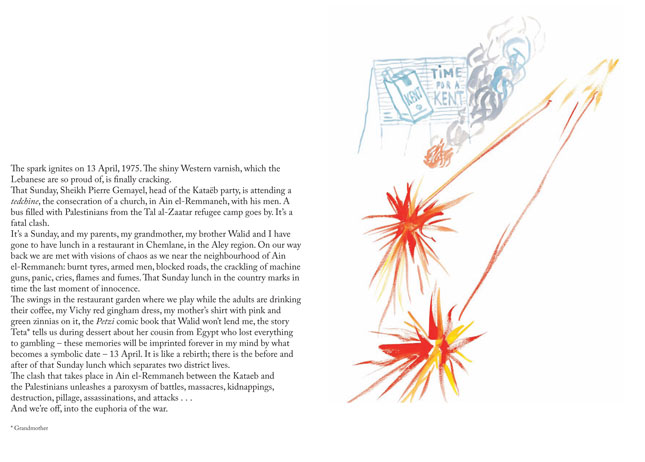