Afghanistan has had opium issues for many years now (the country is the leading opium supplier in the world). In a society disrupted by ongoing conflicts, where more than eighty percent of citizens are farmers, opium has been the only possible getaway for many people – for those producing it – it was a getaway from starvation, and for those consuming it – it was a getaway from the depressing reality. Afghanistan’s economy has thus evolved to the point where it is now highly dependent on opium, just like its people are. 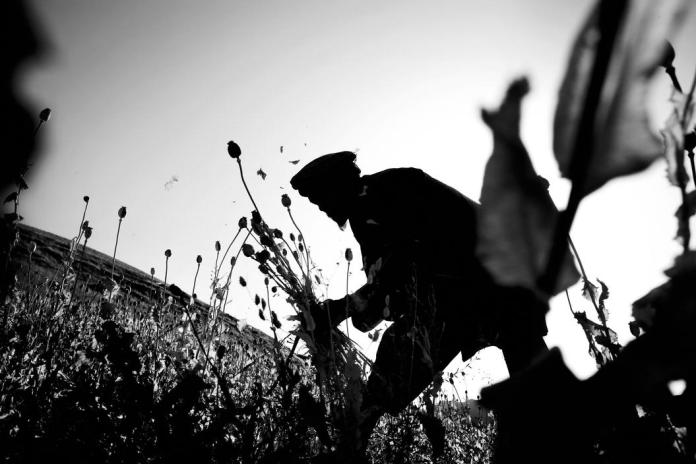 In the 2014 Afghanistan Opium Survey (UNODC & Afghan Ministry of Counter Narcotics), there are several key findings:

The vast majority (89%) of opium cultivation took place in nine provinces in Afghanistan’s Southern and Western regions, which include the country’s most insecure provinces. The total area under opium poppy cultivation in Afghanistan was estimated at 224,000 hectares in 2014, a 7% increase from 2013.  Average opium yield amounted to 28.7 kilograms per hectare in 2014, which was 9% more than in 2013 (26.3 kilograms per hectare), and potential opium production was estimated at 6,400 tons.

Eradication efforts have forced many poppy farmers into the margins of the countryside. To many of them, opium is the only way of securing annual income, only way to survive. That is the way they have been living for many years. War has a lot to do with it, of course. War has everything to do with it, acutally. Since the 1979 Soviet invasion and the insecurity that came with it, opium poppy cultivation became the core of Afghanistan’s agricultural economy. Afghanistan overtook Myanmar as top producer of illicit opium in 1991, and the cultivation has been increasing ever since (with short downfall periods – after 2008, eradication efforts, as well as a cash incentive program for provinces that eradicated all opium poppy crops, helped reduce cultivation drastically through 2010).

Incapable and corrupt government does not make it easier for the farmers. The provinces that are poppy-free receive $1 million awards from the American Embassy, paid directly to the governor’s office. It is not known how that money is divided among people, or what is done for the people with it. Many farmers continue cultivating in new places, in the deep jungle of the countryside.

In the provinces that are not poppy-free, farmers are just angry and sick of promises – many of them are promised wheat seeds and fertilizers to start a new cultivation business, but most of them were never given any, the same way the USAID money (and other aid money) often goes to suspicious places and projects that are never carried out.

Afghanistan is a country still broken in many ways, and it seems that the only thing it is good at is producing opium. Afghanistan could become a true narco-state. In an article ‘Can Afghanistan Win The War Against Opium?‘ (February 2011 National Geographic), veteran Afghan law enforcement official said: “Afghanistan is controlled by the drug mafia. How else do you think those people in the government with their low-paying salaries bought their fancy houses in Dubai and the U.S. in the past few years?”

Another issue concerning opium is the addiction – around ten percent of Afghans are addicted to drugs, often opium or herion. They rarely receive drug treatments, because there are not many rehabilitation programs, and if there are – they are underfunded.

/A poster warning against the use of opium. © Paolo Pellegrin/Magnum Photos/

The overall situation in Afghanistan could be described with one line from Thomas de Quincey’s Confessions of an English Opium Eater: “I take it for granted, that those eat now who never ate before; And those who always ate, now eat the more.”

Kandovan (Iran) is one of the handful villages in the world that was carved into rocks. The story of Kandovan is a story of the 21st century cavemen. Brownbook’s Sophie Chamas describes the trip to Kandovan with the photographer Saber Alinejad:

” ‘I travel to Kandovan a lot. I usually drive, taking the mountainous Kargar Boulevard past the garden city of Osku towards a path that’s full of twists and turns. It takes me through villages full of pink roses before leading me to Kandovan, an incredible village that highlights the history of this land.’

Like many residents of Tabriz, the capital of northwestern Iran’s East Azerbaijan province, photographer Saber Alinejad has been making regular excursions 60 kilometres south to the neighbouring village of Kandovan since he was a child. Believed to be more than 700 years old, the sparsely populated, ancient town of around 600 residents welcomes around 300,000 visitors from Tabriz, greater Iran and far beyond each year, all eager to admire its unusual landscape and meet the troglodytes, or cave dwellers, who call it home.”

“Windows, electricity cables, clotheslines, doors and chimneys become increasingly discernible with every passing kilometre, marking these aged caves not as archaic dwellings, but contemporary homes. ‘Visiting this landscape for the first time as a child was very strange,’ recalls Alinejad. ‘I didn’t know what to make of these people carving “hives” into volcanic rock.’

As an ensemble, these caves are often compared to an enormous termite colony, explaining why their residents call them ‘karan’, meaning ‘beehives’ in the local Turkic dialect.” 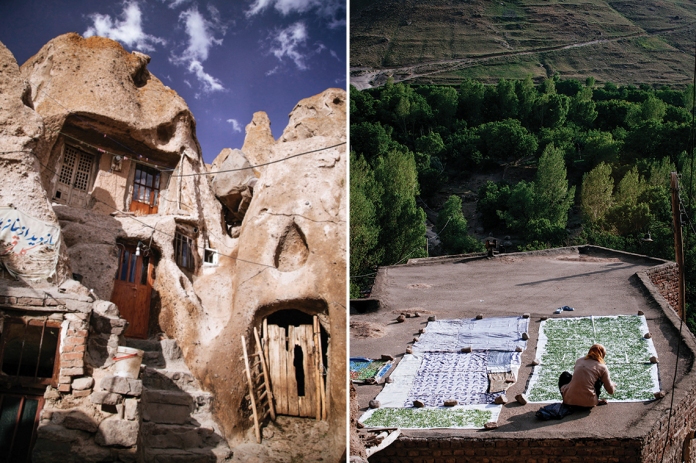 “‘Kandovan is one of a handful of villages in the world that was carved into rocks,’ says Alinejad, ‘and it’s only here that people continue to inhabit their caves. They have the option of leaving for bigger cities to study and find better work, but many like living here. For them, it’s like being in a sturdy castle.’ “

For more about this unique village and its residents, read the full article on Brownbook.

I am finding this story lovely lovely (double lovely is intentional) and can’t help myself but to think about Plato’s Allegory of the Cave. Connecting it with the Kandovan caves story, we could say that the residents of Kandovan might never find the freedom of the philosopher, but I am sure there is beauty to their caves and a freedom of its own. In this case, it just might be the opposite of Plato’s allegory  – free from many torments of the global plague of capitalism , it is they, inside the caves – who can see the life limpidly. 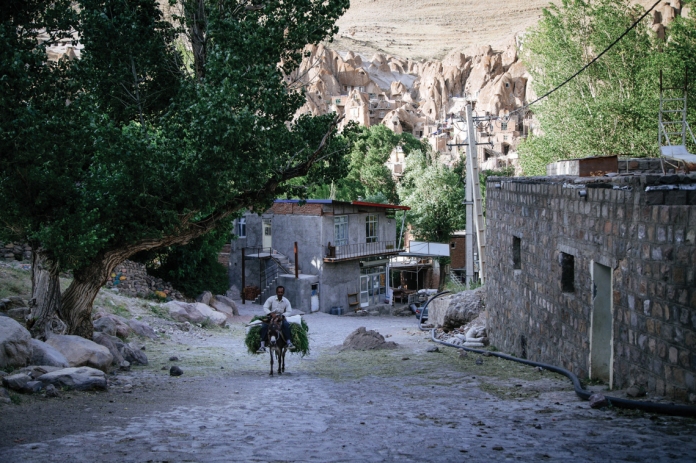 For more great photos of Kandovan, you can also visit Heritage Institute.