In a new scope of work, French-Tunisian street artist eL Seed explores the topic of perception by exploring how outsider judgment and misconception can unconsciously impact a community. This is a beautiful, important and powerful piece of art.

Here’s the story – in the neighborhood of Mokkatam Mountain in Cairo, the Coptic community of Zaraeeb has collected the city’s trash for decades, developing one of the world’s most efficient and highly profitable recycling systems. Yet the place is perceived as dirty, marginalized and segregated.

The Zaraeeb community is not – as public conception has suggested – poor, but rather isolated; not marginalized, but rather pushed away. They are a reflection of the society: they don’t live in the garbage but from the garbage; and not their garbage, but the garbage of the whole city. 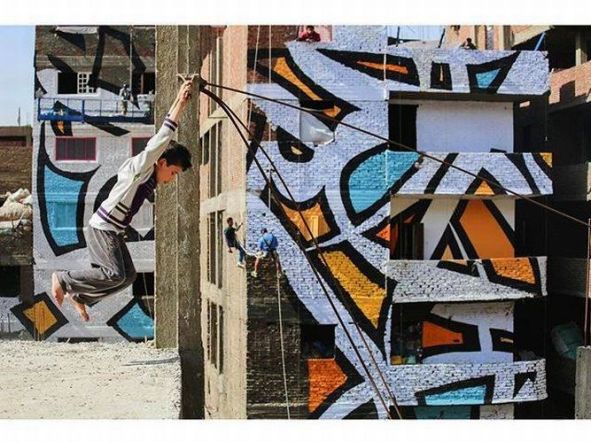 To bring light on this community, in his new project called Perception, eL Seed created a massive, anamorphic piece covering almost fifty buildings – visible in its entirety only from the mountains above.

The piece of art uses the words of Saint Athanasius of Alexandria, a Coptic Bishop from the 3rd century, that said: “Anyone who wants to see the sunlight clearly needs to wipe his eye first”.

The project uses the context of Zaraeeb to question our perception of the people who were once part of the general community, and despite thriving beyond comprehension, are still looked down upon.

eL Seed stated that the project in Zaraeeb neighborhood was one of the most amazing human experiences he ever had.

“They have been given the name of Zabaleen (the garbage people), but this is not how they call themselves. They don’t live in the garbage but from the garbage; and not their garbage, but the garbage of the whole city. They are the ones who clean the city of Cairo”, eL Seed wrote.

For more on eL Seed and his work, visit his facebook page.