On 24th of April 1915, Ottoman authorities rounded up, arrested and executed, some 250 Armenian intellectuals and community leaders in Constantinople. The date is held to be the beginning of the Armenian genocide – Ottoman government’s systematic extermination of Armenian people, inside their historic homeland. Starting from today, Middle East Revised marks the centenary of the Armenian genocide until the end of this year – with various reports, books recommendations, articles, testimonials, etc.

This first article is written by Zdravko Budimir, Croatian political scientist who wrote his master thesis on Armenian genocide and knows the subject very well. I am really happy to be able to publish it on Middle East Revised.

Even though ethnic violence played a large role in history of mankind, there is one distinctive reason why 20th century is considered a dark century. Genocide as a phenomena is a decadency of, not a certain nation, but entire civilization. Violence of the 20th century was prepared. It derived its origins from the imperialistic fashion, where new racist theory justified bloody colonial expansionism and brought in a modern concept of administrative massacres. Genocide is not a single and discrete act but a process. Diagnostically perceived, it is a syndrome developed by simultaneous grouping of various signs and symptoms.

Twentieth century introduced new political ideas and redefinition of older political concepts. Historically, democracy stands for a rule of the people, and there are two definitions of the people and one of them is responsible for turning a genocide into a political weapon.

Conception of people as demos is not a problematic one, as it assumes the differences between people can be set out by compromise. On the other hand conception of people as ethnos overrides compromise as a political tool, and defines nation in ethnic terms. Armenian genocide is the first modern genocide because ethnic violence had exceptional political purpose – removal of others in an already ethnically defined territory.

At the turn of the century Armenian question was integral part of a broader Eastern question and secondary stage for confrontation between European powers.  As a political system an empire could no longer cope with its minorities and their rising political and national aspirations.

/Caption of the photograph reads: The Above Photograph Shows Eight Armenian Professors Massacred by the Turks. Found on Wikipedia/

Hamidian massacres 1894.-1896. were series of mass murders, led by Sultan Abdul Hamid, the Red Sultan. Violence was focused on Armenian society and estimated number of Armenian casualties vary from 80,000 to 300,000. The massacres themselves were, considering reasons and execution, pre-modern (feudal) type of violence and contain pre-genocidal character.

Hamidian massacres opened up for a further process of violence, thus creating a continuity of violence. During and after the massacres a certain type of culture was welcomed. Crimes were forgotten and it’s perpetuers were unpunished. Armenians turned into a safety valve of the system. Safety valve could be opened and tightened at any given time, without making political or moral risks. Hamidian massacres were crucial moment in incubation phase of genocide because vulnerability of Armenian people was detected and recognised (there was no address for Armenians to appeal to), and combined with Turkish invulnerability within the empire it made genocide a possible option.

In 20th century  Ottoman empire faced crisis caused by territory loss. For the first time in history Turks made a majority within their own empire, an empire which was about to collapse. 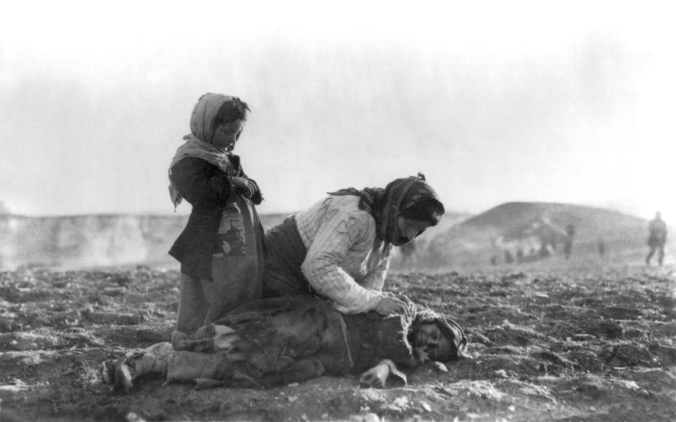 /Armenian woman kneeling beside dead child in a field “within sight of help and safety at Aleppo“. Sometime between 1915 and 1919. Photo source: Wikipedia/

Armenians as a minority faced a historically progressive hatred on an ethnic, religious, economic and political level. Armenians were used to violence. World War I provided a safe curtain for the most brutal act of violence in human history because it intensified nationalism, geopolitical destabilization, and made combining ethnos and demos far more dangerous. Context of total war redefined civilians as potential targets and enabled the use of terror as a supression of potentially cooperating parts of society. Armenian society was suspected for cooperation with the enemy and percieved as a direct threat to the Ottoman state in the same manner.

Extermination of the Armenians begun as elitocide, focused on Armenian leaders, soldiers, fortifications, strategically valuable cities and villages. Elitocide was justified as war necessity and preemptive strike, as Armenians were flagged as enemies.  Leaderless Armenian population was helpless, stateless and without any political representation. Genocide was executed using top-down principle, with a developed administrative system used for the coordination of murderings. 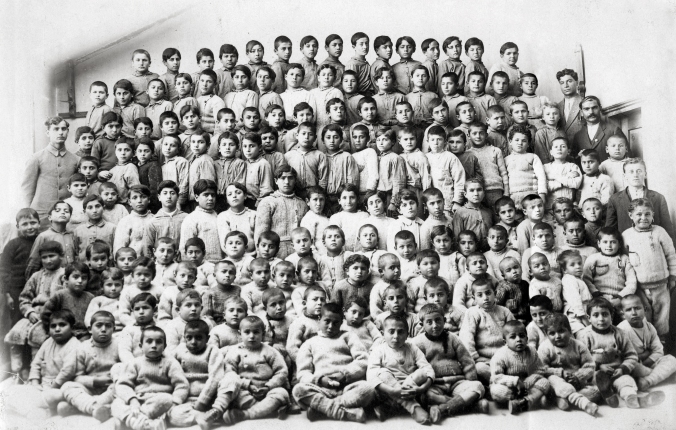 Deportation was introduced as a specific method of genocide  (removal of the others from a heartland) and it was enforced as a law. Deportation and pillage were legal acts and covered for extermination which happened in their sake.

Armenian genocide was perpetuated by Young Turks, a force within a society driven by modern and nationalistic ideal of an ethnically defined nation state.  Young Turks’ desired society was bound by same language, education, religion, moral and aesthetic norms. They aspired towards  the Jacobin model, ruled by centralised state, ruthless homogenizer, egalitarian nationalism within national natural limits. Young Turks’ political rule in war era was an usurpation of a system and radicalization of the political sphere.

Armenian genocide is essentially a modern crime. It was initiated because Young Turks were devoted to the organic nationalism ideology which combined dark side of democracy with dark side of multiethnic empire. Later on, the Turkish nation-state was founded on genocide and it was maintained on its denial. Turkish people as a collective are not responsible for the massacre, but they take their part in culpability by constructing a national myth based on a denial of the other nation.

/An Armenian mother and the corpses of her five children. Photo by Maria Jacobsen, Diary 1907-1919, Kharput-Turkey/

Armenian genocide can be described as a successful crime because it fulfilled its given purpose: final goal, the creation of homogeneous state, was accomplished, crime was forgotten and Turkey unpunished. And even one hundred years later, denying the obvious, historically proven and argumented facts is de facto acceptance of their outcome as favorable. Denial of the genocide means prolonging its effects and the Armenian genocidal process now exists for one hundred years.

One thought on “Centenary of the Armenian Genocide: Denying Genocide Means Continuing Genocide.”