Manuscripts really do not burn. Seven years after the explosion of al-Mutanabbi street in Baghdad, the famous street of poets and booksellers is slowly recovering. I already wrote about the coalition of artists working on ‘An Inventory Of Al-Mutanabbi Street’, a project to “re-assemble” some of the “inventory” of the reading material that was lost in the bombing.

Today, I decided to gather photos and experiences from al-Mutanabbi street, before and after the bombing, to try to feel the atmosphere of this legendary street. Jason Florio in his photo essay Baghdad Café (Orion Magazine, 2003) observes how:

“Throughout the Al- Mutanabbi district, the restaurants are full, the fruit stands are fully stocked, and the red double-decker buses rolling by seem oddly familiar. There are no armed militiamen at intersections. No tanks grinding up the asphalt on Sharia Raschid…

The Sh’ah Bander and other nearby cafes are a haven from sanctions that have left many intellectuals driving Taxis for Dinar instead of punding keys of Crown typewriters. There is little money in Baghdad at all, even less for the purchase of words, but their passion for writing has not been dissuaded by the lack of financial renumeration. ‘We don’t need a full stomach, but we need to write’, says Wajeeh Abbas, who writes for next to nothing for the weekly magazine al-Itihad.”

/all images above © Jason Florio/

Here is the feature from the Radio Free Europe /Radio Liberty about the revival of al-Mutanabbi street in 2010. Poets are gathering again, reciting their poetry, celebrating love and life. 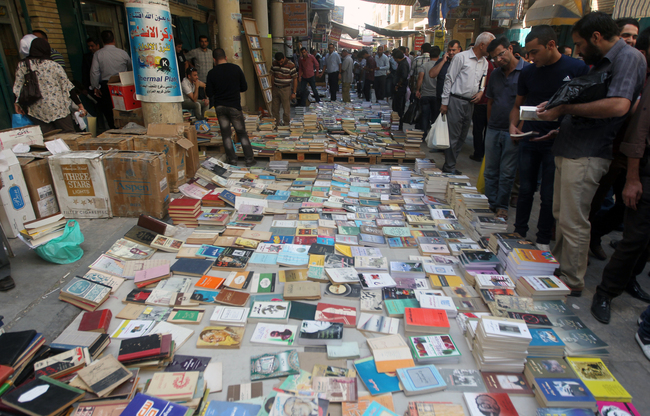 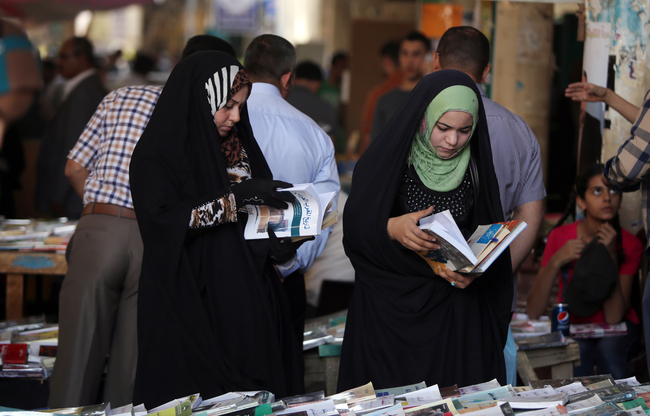 Seated near the entrance of the Shahbandar literary cafe , owner Haji Mohammed al Khashali gazes out to Al Mutanabbi street , a centuries old hub for booksellers and intellectuals. A 2007 car bomb near the cafe killed five of Khashali’s sons, whose portraits hang on the wall. /image © Lynsey Addario, After the Storm – Baghdad series/

At times … I wish
I could meet in a duel
the man who killed my father
and razed our home,
expelling me
into
a narrow country.
And if he killed me,
I’d rest at last,
and if I were ready—
I would take my revenge!

But if he turned
out to be on his own—
cut off like a branch from a tree—
without a mother or father,
with neither a brother nor sister,
wifeless, without a child,
and without kin or neighbors or friends,
colleagues or companions,
then I’d add not a thing to his pain
within that aloneness—
not the torment of death,
and not the sorrow of passing away.
Instead I’d be content
to ignore him when I passed him by
on the street—as I
convinced myself
that paying him no attention
in itself was a kind of revenge.

Listen to Taha reading it beautifully in Arabic, and Peter Cole translating it greatly into English. It is a special experience. And do not forget – keep track of Iraq Body Count. Al-Mutanabbi street might be healing, but Iraq is far from being at peace (at last).

One thought on “Al-Mutanabbi Street and the Healing Power of Poetry.”