I recently stumbled upon Edward Said‘s diary from his journey to France in 1979 and his encounters with Sartre, de Beauvoir and Foucault. The full diary can be found on London Review of Books, and here are the excerpts:

“For my generation he (Sartre) has always been one of the great intellectual heroes of the 20th century, a man whose insight and intellectual gifts were at the service of nearly every progressive cause of our time. Yet he seemed neither infallible nor prophetic. On the contrary, one admired Sartre for the efforts he made to understand situations and, when necessary, to offer solidarity to political causes. He was never condescending or evasive, even if he was given to error and overstatement. Nearly everything he wrote is interesting for its sheer audacity, its freedom (even its freedom to be verbose) and its generosity of spirit.” 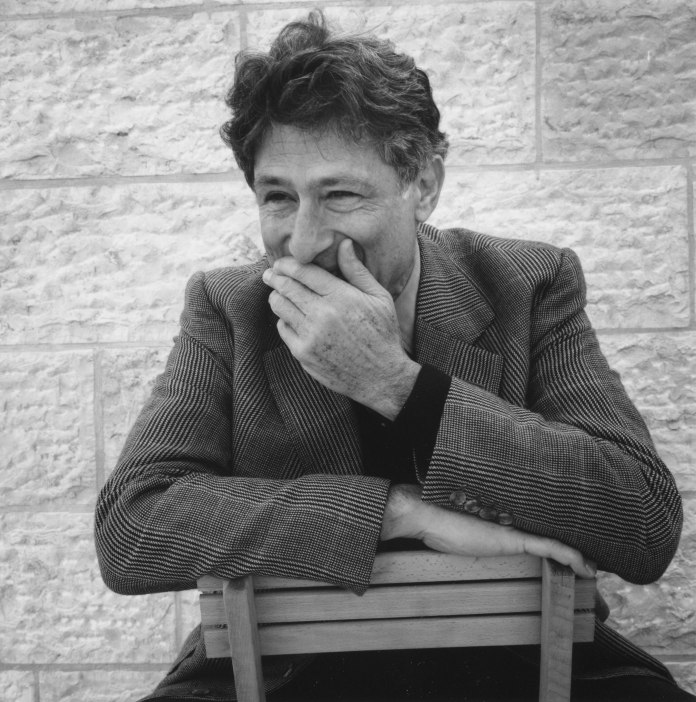 “When I arrived, I found a short, mysterious letter from Sartre and Beauvoir waiting for me at the hotel I had booked in the Latin Quarter. ‘For security reasons,’ the message ran, ‘the meetings will be held at the home of Michel Foucault.’ I was duly provided with an address, and at ten the next morning I arrived at Foucault’s apartment to find a number of people – but not Sartre – already milling around. No one was ever to explain the mysterious ‘security reasons’ that had forced a change in venue, though as a result a conspiratorial air hung over our proceedings. Beauvoir was already there in her famous turban, lecturing anyone who would listen about her forthcoming trip to Teheran with Kate Millett, where they were planning to demonstrate against the chador; the whole idea struck me as patronising and silly, and although I was eager to hear what Beauvoir had to say, I also realised that she was quite vain and quite beyond arguing with at that moment.” 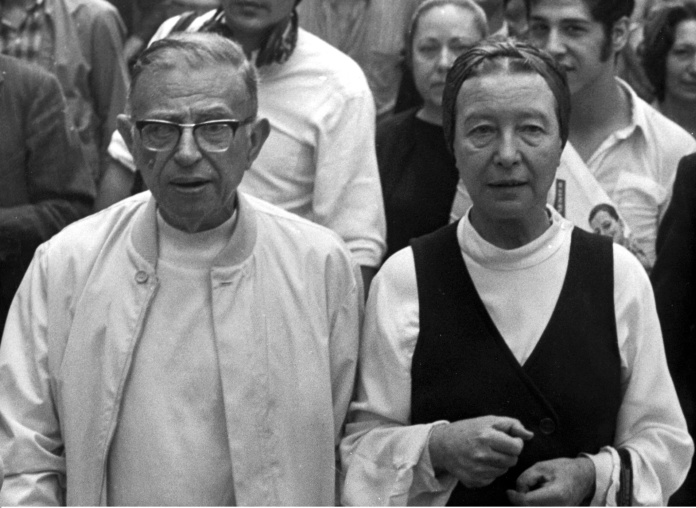 “As that day wore on, I slowly discovered that a good deal of negotiating had gone on beforehand to bring the seminar about, and that what participation there was from the Arab world was compromised, and hence abridged, by all the prior wheeling and dealing. I was somewhat chagrined that I hadn’t been included in any of this. Perhaps I had been too naive – too anxious to come to Paris to meet Sartre, I reflected. There was talk of Emmanuel Levinas being involved, but, like the Egyptian intellectuals whom we’d been promised, he never showed up. In the meantime all our discussions were being recorded and were subsequently published in a special issue of Les Temps modernes (September 1979). I thought it was pretty unsatisfactory. We were covering more or less familiar ground, with no real meeting of minds.

Beauvoir had been a serious disappointment, flouncing out of the room in a cloud of opinionated babble about Islam and the veiling of women. At the time I did not regret her absence; later I was convinced she would have livened things up. Sartre’s presence, what there was of it, was strangely passive, unimpressive, affectless. He said absolutely nothing for hours on end. At lunch he sat across from me, looking disconsolate and remaining totally uncommunicative, egg and mayonnaise streaming haplessly down his face. I tried to make conversation with him, but got nowhere. He may have been deaf, but I’m not sure. In any case, he seemed to me like a haunted version of his earlier self, his proverbial ugliness, his pipe and his nondescript clothing hanging about him like so many props on a deserted stage.”

“Sure enough Sartre did have something for us: a prepared text of about two typed pages that – I write entirely on the basis of a twenty-year-old memory of the moment – praised the courage of Anwar Sadat in the most banal platitudes imaginable. I cannot recall that many words were said about the Palestinians, or about territory, or about the tragic past. Certainly no reference was made to Israeli settler-colonialism, similar in many ways to French practice in Algeria. It was about as informative as a Reuters dispatch, obviously written by the egregious Victor to get Sartre, whom he seemed completely to command, off the hook. I was quite shattered to discover that this intellectual hero had succumbed in his later years to such a reactionary mentor, and that on the subject of Palestine the former warrior on behalf of the oppressed had nothing to offer beyond the most conventional, journalistic praise for an already well-celebrated Egyptian leader. For the rest of that day Sartre resumed his silence, and the proceedings continued as before. I recalled an apocryphal story in which twenty years earlier Sartre had travelled to Rome to meet Fanon (then dying of leukemia) and harangued him about the dramas of Algeria for (it was claimed) 16 non-stop hours, until Simone made him desist. Gone for ever was that Sartre.“ 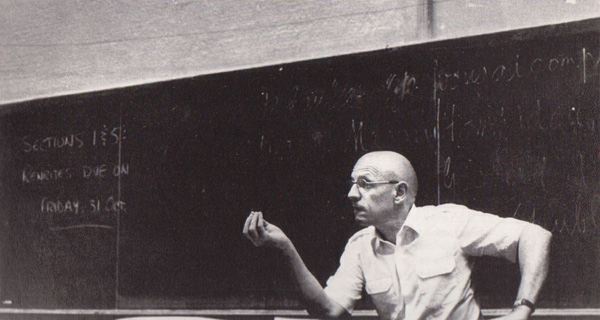 “Foucault very quickly made it clear to me that he had nothing to contribute to the seminar and would be leaving directly for his daily bout of research at the Bibliothèque Nationale. I was pleased to see my book Beginnings on his bookshelves, which were brimming with a neatly arranged mass of materials, including papers and journals. Although we chatted together amiably it wasn’t until much later (in fact almost a decade after his death in 1984) that I got some idea why he had been so unwilling to say anything to me about Middle Eastern politics. In their biographies, both Didier Eribon and James Miller reveal that in 1967 he had been teaching in Tunisia and had left the country in some haste, shortly after the June War. Foucault had said at the time that the reason he left had been his horror at the ‘anti-semitic’ anti-Israel riots of the time, common in every Arab city after the great Arab defeat. A Tunisian colleague of his in the University of Tunis philosophy department told me a different story in the early 1990s: Foucault, she said, had been deported because of his homosexual activities with young students. I still have no idea which version is correct. At the time of the Paris seminar, he told me he had just returned from a sojourn in Iran as a special envoy ofCorriere della sera. ‘Very exciting, very strange, crazy,’ I recall him saying about those early days of the Islamic Revolution. I think (perhaps mistakenly) I heard him say that in Teheran he had disguised himself in a wig, although a short while after his articles appeared, he rapidly distanced himself from all things Iranian. Finally, in the late 1980s, I was told by Gilles Deleuze that he and Foucault, once the closest of friends, had fallen out over the question of Palestine, Foucault expressing support for Israel, Deleuze for the Palestinians.”

“For reasons that we still cannot know for certain, Sartre did indeed remain constant in his fundamental pro-Zionism. Whether that was because he was afraid of seeming anti-semitic, or because he felt guilt about the Holocaust, or because he allowed himself no deep appreciation of the Palestinians as victims of and fighters against Israel’s injustice, or for some other reason, I shall never know. All I do know is that as a very old man he seemed pretty much the same as he had been when somewhat younger: a bitter disappointment to every (non-Algerian) Arab who admired him. Certainly Bertrand Russell was better than Sartre, and in his last years (though led on and, some would say, totally manipulated by my former Princeton classmate and one-time friend, Ralph Schoenman) actually took positions critical of Israel’s policies towards the Arabs. I guess we need to understand why great old men are liable to succumb either to the wiles of younger ones, or to the grip of an unmodifiable political belief. It’s a dispiriting thought, but it’s what happened to Sartre. With the exception of Algeria, the justice of the Arab cause simply could not make an impression on him, and whether it was entirely because of Israel or because of a basic lack of sympathy – cultural or perhaps religious – it’s impossible for me to say. In this he was quite unlike his friend and idol Jean Genet, who celebrated his strange passion for Palestinians in an extended sojourn with them and by writing the extraordinary ‘Quatre Heures à Sabra et Chatila’ and Le Captif amoureux. A year after our brief and disappointing Paris encounter Sartre died. I vividly remember how much I mourned his death.”

For more, go to London Review of Books.

2 thoughts on “Edward Said’s Diary: On encounters with Sartre, de Beauvoir and Foucault.”