On March 5th 2007, a car bomb exploded on al-Mutanabbi Street in Baghdad. More than 30 people were killed and more than 100 were wounded. Al-Mutanabbi Street is the historic center of Baghdad bookselling, with bookstores and outdoor bookstalls, cafes, stationery shops, and even tea and tobacco shops. It has been the heart and soul of the Baghdad literary and intellectual community.

In 2010, Beau Beausoleil put out a call for book artists to join ‘An Inventory Of Al-Mutanabbi Street’, a project to “re-assemble” some of the “inventory” of the reading material that was lost in the bombing. The inventory of al-Mutanabbi Street was as diverse as the Iraqi population, including literature of both Iraq and the Middle East, history, political theory, popular novels, scholarly works, religious tracts, technical books, poetry, mysteries; even stationery and blank school notebooks could be purchased on this street, as well as children’s books, comics, and magazines. Arabic was  the predominate language but books in Farsi, French, German, and English were also represented. Because books have their own journeys, ones quite unknown to us, there were also a few books in Chinese, Japanese, Korean, Dutch, or Italian, as well as classic Greek and Latin, Hindi, or Russian.

The coalition asked each book artist who joined the project to complete three books (or other paper material) over the course of a year, books that reflected both the strength and fragility of books, but also showed the endurance of the ideas within them. They were asked to reflect both the targeted attack on this “street of the booksellers” as well as the ultimate futility of those who try to erase thought.

“This project brought me back to my childhood in Baghdad. When Iraqis want to read, the first place they turn to is Al-Mutanabbi Street, a Mecca for all writers, poets, novelists, students and anyone who is thirsty for knowledge. I remember my mother and I would walk from our home to Al-Mutanabbi Street so we could purchase books. From Al Mutanabbi Street we would walk to the Shorjah Market, where we always bought our groceries from the many vendors in the market. I loved to learn, so these trips became food for the mind, for the body and for the soul.”

What is a book? Poems for al-Mutanabbi street by Ama Bolton

“I wrote the first of these poems after hearing Dr. Saad Iskander on BBC Radio, and later printed it as a broadside for the Al-Mutanabbi Street Coalition. I joined the project because it gave me a chance to do something instead of feeling powerless.”

“My book is both a lament for lives lost and a testament to the enduring nature of books and learning. Formally, the work is like a book- but its pages tell a visual story of grief. The names of those who died in the bombing are written on the ribbon that winds through pages of cut away text blocks. These names represent only a few of the many thousands of Iraqis who have lost their lives in the war.”

The Iraqi BookSeller by Laurie Szujewska

“The Iraqi Bookseller is inspired by The Bookseller’s Story Ending Much too Soon, an article written by Anthony Shadid for the Washington Post Foreign Service on March 12, 2007 . Shadid’s story is a personal account of the Mutannabi Street bombing told through a reminiscence of his friendship with Mohammed Hayawi, a bookseller on the street. It is intended to be both a remembrance of Hayawi and a tribute to Shadid’s poignant story of his friend.”

Not a straight line by Emily Martin

“My intention with Not a Straight Line was to recreate the movements of someone browsing on Al-Mutanabbi Street. The book is comprised of 10 linked Coptic bound books with one line of the text in each of the books. To read the book the viewer must find their way along the linked books that turn this way and that way much as a meandering street would. The text I wrote is one of defiance, the written word can be damaged but will always prevail.” 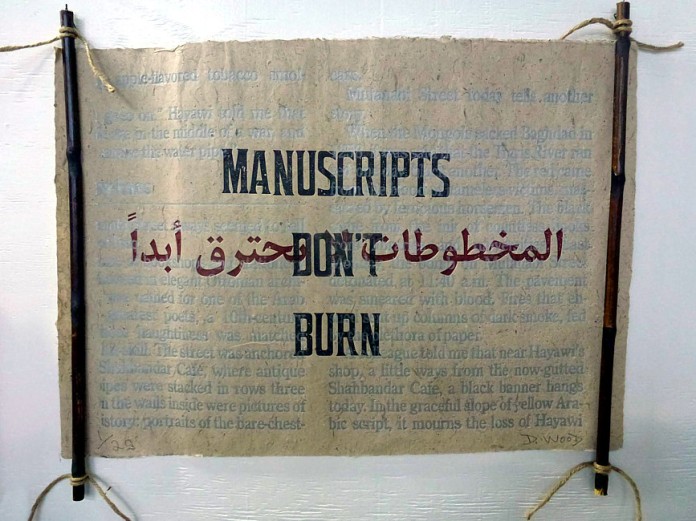 “‘Manuscripts Don’t Burn’ is from the novel ‘The Master and Margarita’, written in the 1930’s by Mikhail Bulgakov, the soviet writer and satirist. The line is spoken by the devil to a writer who had destroyed his own work, which then magically reappears. It has been interpreted through the years as a testament to the writer and artist’s perseverance through oppression, and became somewhat prophetic for Bulgakov’s own life.“

“Before I was born in al-Mutanabbi Street, I was no one. I could deny the documents that made reference to my birth on a particular day of the year or a certain province of the country. I was a mere small woman without a place in this world. Then I was born on al-Mutanabbi Street the day my first book was published–A Passage to the Sadness of Men. I had discovered as a girl of nine the richness of the story through 1,001 Nights in a room that girls were forbidden to enter, and I was determined to become the contemporary Shahrezade. This young girl had no future, except perhaps to become a woman set aside to live a pointless life among quiet, forgotten women. But Shahrezade, the first woman to use the magic of imagination to narrate the tales of the East, plucked me out of my time and visited upon me the spell of dreams and tattooed a shining mark on my forehead, setting in place my destiny, as had the gods and goddesses of old:  Go to the place of books. You will be one of those women who narrate stories, one of the daughters of Shahrezade.”

And do read the above mentioned article The Bookseller’s Story, Ending much too soon by Anthony Shadid for Washington Post. Here is an excerpt:

“Unlike the U.S. soldiers who die in this conflict, the names of most Iraqi victims will never be published, consigned to the anonymity that death in the Iraqi capital brings these days. Hayawi was neither a politician nor a warlord. Few beyond Mutanabi Street even knew his name. Yet his quiet life deserves more than a footnote, if for no other reason than to remember a man who embraced what Baghdad was and tried to make sense of a country that doesn’t make sense anymore. Gone with him are small moments of life, gentle simply by virtue of being ordinary, now lost in the rubble strewn along a street that will never be the same.

After his death, I thought back to our conversation on that summer day. As he often did, Hayawi paused after an especially vigorous point and dragged on his cigarette. He ran his hand over his sweaty cheeks. ‘Does this look like the face of 39 years?’ he said, grinning. He then knitted his brow, turning grimmer. ‘We don’t want to hear explosions, we don’t want to hear about more attacks, we want to be at peace,’ he told me. He always had dark bags under his limpid eyes, whether or not he had slept. ‘An Iraqi wants to put his head on his pillow and feel relaxed.’ ”