The fifteenth of May came, and it passed – it passed like the air passes through our body – an everyday thing, quiet and subtle, although it’s so important and so essential.

It was the day of Nakba, the day when hundreds of thousands of Palestinians fled from their homes, when they watched the skies falling on their heads, when they died or continued to live – with sadness and longing, always looking back, back to that all-defining 1948. 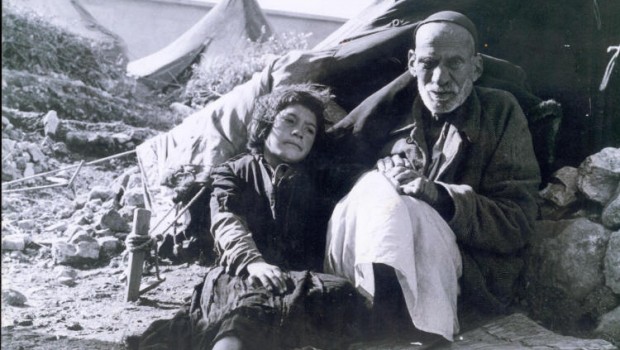 It was exactly on that day this year, that I found myself reading Adina Hoffman‘s My happiness bears no relation to happiness, a biography of the great Palestinian poet Taha Muhammad Ali. It was a regular day, I was sitting in a remote café close to Zagreb’s main square, far from Palestine, far from anything that could make my mind drift there. I had a break from work and opened the book. I wanted to read it for such a long time, I couldn’t wait. So I read, and I read.

I was in Palestine, in Saffuriyya, with Taha, selling eggs and feeding his family at the age of 11, with Taha and his father, listening to the stories of other village people in their madafeh, with his mother, Um Taha, preparing fresh bread with herbs. I was with Taha when he broke a little hole in the wall of his house and opened his little shop where he sold candies, soda, and all the little treats not easy to get in the village.

It was the month of Ramadan, and Taha decided to spend all his money to get a lot of good things, he even decided to buy a flock of goats, although his father warned him to save some money, because they’ve already heard the bad news about other villages and changes happening – they’ve also seen some refugees… Still, there was hope, hope nothing bad would happen. Why would it happen? Taha bought a lot of things, spent his money, and – on the evening of the 15th of May, set out with his goats to wander the hills for a while.

Now, for the part that followed, I will quote the book directly ;

„Following the dirth path that ran beside the bayader, he walked for about five minutes, and it was then that he heard an odd, low, whirring sound, something circling in the air above. As it lifted to a whistle, then mounted to a roar, he saw a brilliant flash, felt a crash and tremor, and another – then everything was smashing glass and rising smoke, shouts in the distance, wailing nearby, people running, children crying, the sixteen goats yelping in terror as they scattered.“

I couldn’t continue reading. It was too much. A great book can tare you apart, but when it’s a great book and you also know it’s not fiction – it can tare you apart and brake you down to your bones. It was a little later that it hit me – that I read that part on the same date – the fifteenth of May.

Taha lost his village sixty six yeary ago, he lost his little shop, he lost the life he knew as life. But he didn’t give up on it, he didn’t forget that image, those memories, those emotions. As most of the Palestinians do – he continued to live his Palestine. And it’s a painful thing, because emotions are not clothes you can get rid of when the season changes. You may forget the details, the names, the exact hours – but you never forget how you felt, how someone or something made you feel. “In my poetry,” Taha Muhammad Ali said, “there is no Palestine, no Israel. But, in my poetry, suffering, sadness, longing, fear, together, make the results: Palestine and Israel.“

The Nakba people felt fear, pain, anger, sadness… And it is still here, sixty six years ago.  Because not much has really changed. There’s still so much uncertainty, so much pain, fear, and anger that is being concieved and reborn under the status quo.

It is as if all the hills are echoing – justice, justice finally! But when will the Israeli government hear it? When will it acknowledge the echoes of the past that are spilling all over the present? When will it finally see Taha and his flock of goats, shivering in the darkness?

3 thoughts on “The subtle echoes of Nakba and Taha Muhammad Ali.”