There is some controversy over Einstein’s political views especially when it comes to the issue of Palestine and the creation of a Jewish State. Many Zionists claim Einstein as one of their own. Einstein, however, was a pacifist, a universalist and abhorred nationalism.

For example, Einstein made a presentation to the Anglo-American Committee of Inquiry, which was examining the Palestine issue in January 1946 and argued against the creation of a Jewish State. Here is a quote from Einstein’s testimony before Judge Hutcheson, the American Chairman of the Committee:

Judge Hutcheson: It has been told to our committee by the Zionists that the passionate heart of every Jew will never be satisfied until they have a Jewish state in Palestine. It is contended, I suppose, that they must have a majority over the Arabs. It has been told to us by the Arab representatives that the Arabs are not going to permit such condition as that, they will not permit having themselves converted from a majority to a minority.

Judge Hutcheson: I have asked these various persons if it is essential to the right or the privilege of the Jews to go to Palestine, if it is essential to real Zionism that a setup be fixed so that the Jews have a Jewish state and a Jewish majority without regard to the Arab view. Do you share that point of view, or do you think the matter can be handled on any other basis?

Dr. Einstein: Yes, absolutely. The state idea is not according to my heart. I cannot understand why it is needed. It is connected with many difficulties and narrow-mindedness. I believe it is bad.

Albert Einstein wrote in a letter to American Friends of the Fighters for the Freedom of Israel shortly after the 1948 Deir Yassin massacre and referred to the Irgun, led by Menachem Begin later a Prime Minister of Israel, and the Stern Gang, where Yitzhak Shamir also a future Prime Minister of Israel was a member, as terrorist organizations and refused to support these “misled and criminal people.” 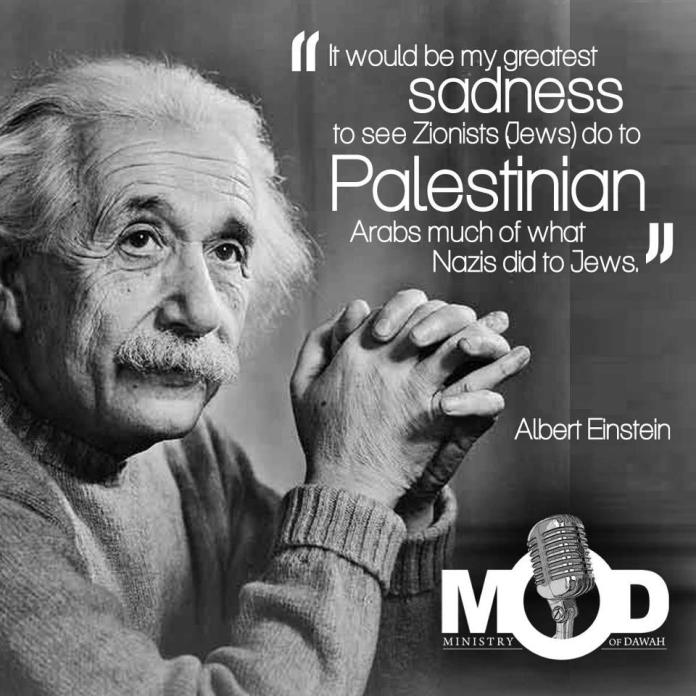 In 1950 Einstein published the following statement on the question of Zionism. This speech was originally given to the National Labor Committee for Palestine, in New York, on April 17, 1938 but republished by Einstein after Israel’s creation.

„I should much rather see reasonable agreement with the Arabs on the basis of living together in peace than the creation of a Jewish state. Apart from the practical considerations, my awareness of the essential nature of Judaism resists the idea of a Jewish state with borders, an army, and a measure of temporal power no matter how modest. I am afraid of the inner damage Judaism will sustain – especially from the development of a narrow nationalism within our own ranks, against which we have already had to fight without a Jewish state.“

To quote David Horowitz: “Einstein’s opposition to Israel was widely known and reported on during his life. In fact, the myth of Einstein’s support of Israel was born the day after Einstein’s death in his obituary in The New York Times, which shamelessly wrote that he championed the establishment of the Jewish state. This contradicted decades of reporting from the Paper of Record. Jerome provides some examples, including a 1930 article headlined Einstein attacks British Zion Policy, a 1938 article stating Einstein was Against Palestine State and a 1946 article stating Einstein Bars Jewish State.”

It is clear that Albert Einstein did not support political Zionism and opposed a Jewish State based on an ethnic or racial basis. His political views were remarkably consistent and supported   universal human rights. He was opposed to war and chauvinistic ethnic nationalism. Today Einstein is a revered as a political and scientific icon. However, many unfortunately forget his wise words on the issue of Palestine and its conflict with political Zionism.

For more about this topic, read:  Albert Einstein, Out of My Later Years, (New York: Philosophical Library, 1950), and Einstein on Israel reveals essential history of debate over Zionism and a Jewish state, by Adam Horowitz, Mondoweiss, May 28, 2009.